At this time, our office is open for regular business with extra precautions to ensure a safe and healthy environment for our patients and staff. If you have an upcoming appointment but have fever or symptoms of Covid-19, please call us to reschedule without a cancellation fee. To read about our current safety protocols,
Please Click Here 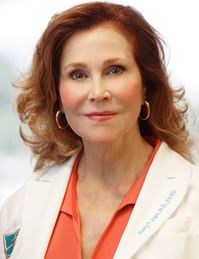 Meet one of the country's leading experts in the field of non-surgical skin rejuvenation.
Since 1983, Mary P. Lupo, M.D., has been at the forefront of non-surgical skin rejuvenation. She realized at that time the desire for patients to look younger without the downtime and serious risks associated with surgery, as well as the importance of preventative care and maintenance of correction once it was achieved. She began using innovative combination protocols for her patients that included collagen fillers, light chemical peels, and topical products such as Retin A and alpha hydroxy acids with sun protection to make the skin look years younger. This trend is now the cornerstone of non-surgical care along with the additions of Botox to relax hyperactive muscles, newer more long-lasting fillers, and laser and other energy devices. Patients travel from miles away for the insight and experience that Dr. Lupo can provide to reshape and rejuvenate their faces without cutting. Dr. Lupo's patients understand that it is not the use of one particular filler or laser, but rather the application of these tools in tandem that achieves the best possible result. You cannot learn the nuances of these techniques and their optimal application at a weekend course. It is gleaned over a lifetime of experience. In addition, the years of teaching other physicians, serving on advisory boards, and performing clinical trials on the latest techniques have resulted in Dr. Lupo always being on the cutting edge of non-cutting (no surgery) skin rejuvenation.

Look and feel like the best version of yourself 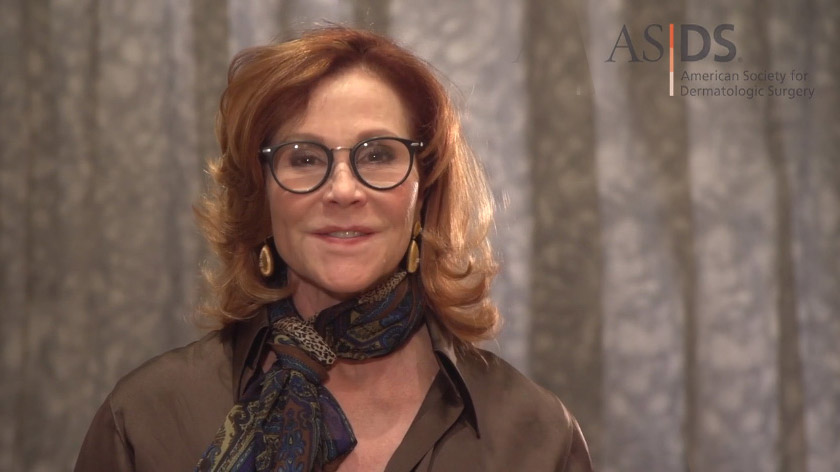 
I’m Dr. Mary Lupo, a Board-certified dermatologist and member of the American Society for Dermatologic Surgery. I am often asked what do the terms non-surgical rejuvenation and non-invasive body contouring really mean. Quite simply, it means getting meaningful results with less aggressive, non-surgical techniques such as injectables and devices, eliminating the risk of surgical procedures.

Who is a good candidate? Optimal results are seen in patients with mild to moderate age-related changes of the face, neck and hands and for body contouring, people with a BMI of less than 30. Severe aging in older patients who have not been seeing a Board-certified dermatologist regularly to postpone the changes everyone sees with age … are patients with severe obesity likely would be best served with the surgical procedure.

Since I opened my practice in 1984, I have been performing non-surgical procedures, teaching residents and peers my techniques, contributing to the advancement in these techniques by advising companies on new devices and performing research for products and devices to be cleared by the FDA.

The types of products I researched or acted as an advisory consultant include dermal fillers such as Juvederm, bio-stimulatory fillers such as Sculptra and Radiesse, neuromodulators such as botox and energy devices for fat reduction, skin tightening and improvement of red and brown discolored skin.

My mission is to provide innovative, effective, ethical care to make my patients look and feel like the best version of themselves. Non-surgical rejuvenation and body contouring are my particular specialties and I invite you to consult with me for your needs.

As director of Tulane's Resident Cosmetic Clinic, Dr. Lupo has taught fillers, Botox, sclerotherapy, chemical peels, and laser therapies since 1984. As a member of the Allergan National Training Center and National Education Faculty, she teaches Botox injection techniques to other physicians. She is a founding director of The Cosmetic Boot Camp, an innovative CME program that teaches Board-certified core aesthetic physicians the latest techniques for aging skin correction. Dr. Lupo is the author of more than 60 published articles and book chapters, and she has been a speaker on various dermatological topics at nearly 250 national and international meetings and seminars.

Since 1983, Mary P. Lupo, M.D., has been at the forefront of non-surgical skin rejuvenation. if you are someone wanting to look young without the downtime and serious risks associated with surgery, then Dr. Lupo is who you are looking for. Dr. Lupo is a Board-certified dermatologist and clinical professor of dermatology at Tulane University School of Medicine. Dr. Lupo received a Bachelor of Science undergraduate degree in biology from Newcomb College of Tulane University where she graduated summa cum laude with honors, achieving the highest four-year grade point average of the graduating class of 1976. She graduated from Tulane University School of Medicine in 1980 and completed her internal medicine internship at Ochsner Foundation, before entering the dermatology program at Tulane University School of Medicine where she served as chief resident in her final year. Dr. Lupo was presented the Peterkin Award for her original research in skin lipids and inflammation in patients with atopic dermatitis. She is licensed to practice in Louisiana and Colorado. Content credit : https://www.drmarylupo.com/dr-mary-lupo.html


When I was a resident from 1981 to 1984 in Dermatology Tulane and when I was a chief resident in 1983/84 was the year that the Zderm and Zplast came out this was the very first FDA approved dermal fillers.

I thought at that time there was really going to be a market for non-surgical rejuvenation and I started when I was chief resident at this specific clinic in Tulane that was called the resident injection clinic.

In that clinic that I started when I was chief resident, we would concentrate on these dermal injections, chemical peels and sclerotherapy which are the injections for leg veins.

We became very good at it because we practiced it on our friends on each other, on relatives and whoever wanted to let us learn how to do this new procedure.

When I finished my residency in 1984, I realized that there was no other practice in New Orleans that specialized in cosmetic dermatology. So, I started my own practice from scratch rather than join an existing practice with an established physician, that didn’t have the vision I had for what I wanted to have for a practice.

So, I started the Lupo Center for general anesthetic dermatology in July 1984 and I built it up from the ground.

Contact us on : (504) 777-3047 to book an appointment with the board-certified dermatologists and the experts in the field of non-surgical skin rejuvenation.

Dr. Lupo was on the original advisory board for Sculptra prior to FDA approval, and is also on advisory boards for Revance and Merz. She was principal investigator in trials for Kybella, Volbella, Botox for crow’s feet, and several acne and rosacea drugs that resulted in FDA approval. She has been a faculty member for the American Society for Dermatological Surgery's Filler courses, and program director for Tulane University School of Medicine's Botox, Filler, Laser, and Cosmeceutical CME courses. Dr. Lupo was a faculty member for the 2007 Consensus Guidelines Update Conference to delineate optimal protocols for Botulinum Toxin Type A and dermal fillers. Her lectures shared her expertise in the treatment of photoaging, non-surgical skin rejuvenation, and sclerotherapy as well as her knowledge of cosmeceuticals. She was chosen by Inamed to be an FDA investigator in 2004 for the hyaluronic filler, Juvéderm, which received FDA approval in 2006. As a clinical instructor for Allergan for Juvéderm, she helped to launch the product to physicians in Australia in 2007. In 1999, she was the first physician in Louisiana to perform photorejuvenation with Intense Pulsed Light. She has acted as a consultant or speaker over the years for Inamed, Bristol Meyers Squibb, Playtex, Kao Brands (Jergens, Curél, Ban, and Bioré), Allergan (both skin care and Botox Cosmetic divisions), Dermik, Merz, Medicis, Galderma, Stiefel, Neocutis, Ortho- Neutrogena, LaRoche Posay, L'Oreal, Philosophy, and TopMD Skin Care.

In 1995, Dr. Lupo founded the Dr. Mary Lupo Skin Care System, an innovative skin care product line for all skin types. She is often quoted in national beauty magazines on various dermatological topics from acne to aging skin, and from skin cancers to fillers and cosmeceuticals. She has appeared on E! Entertainment Network, the Food Network, CNN news, and The View as well as local CBS, NBC, ABC, and FOX affiliates in New Orleans.

Dr. Lupo has been married to Robert E. Smith Lupo since 1980, and together they have two children, Tom and Francesca. Her hobbies include spending time with her family and Labrador retrievers, hiking, snorkeling, skiing, snowshoeing, Pilates, and cooking. 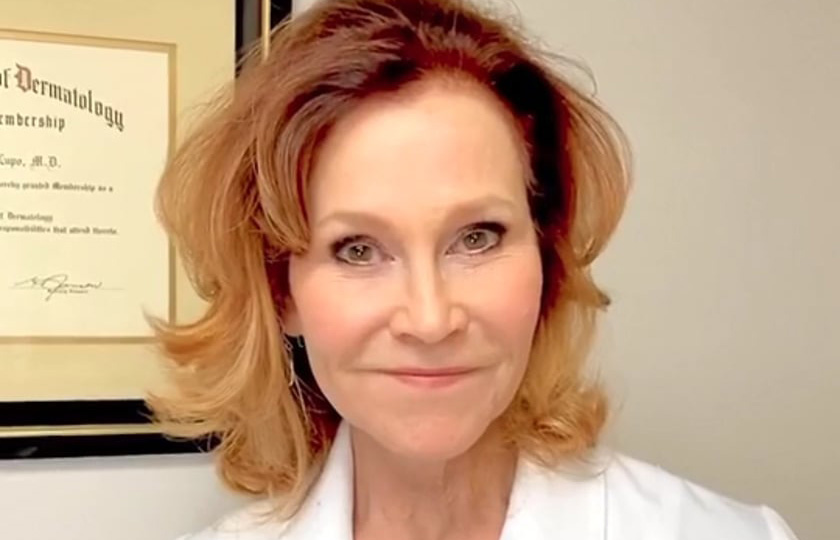 Back in 1983 when I was a senior resident and chief resident at Tulane, the product called Zyderm, which was the very first dermal filler, was FDA-approved. I actually started to learn how to use that product as a resident by starting a resident injection clinic at Tulane.

I used to recruit women from my exercise club to come in and let me practice on them. I became a board-certified dermatologist in 1984, and my practice from the get-go was always concentrating on aesthetics. Back then in the 80s, all I had was alpha hydroxy acids and Retin-A and sunscreens, and in the office: peels, Zyderm and Zyplast, and I did a lot of dermabrasion. Dermabrasion, it was mechanical resurfacing of the skin. Then 10 years later, in the mid 90’s, C02 laser resurfacing came out and I began to use that in my practice. And we used it for a number of years, but we found that that procedure was a little too aggressive for most patients to tolerate. They didn’t like the down time—the excessive healing time. So then non-ablative lasers came out, and we adopted those.

We were doing intense pulsed light back in 1999, and we added laser hair removal and spot treatments with a 532 laser. Then in 2002, even though we had been doing Botox since 1996 in my practice, Botox became FDA-approved, and our Botox numbers soared, and in 2003, we got the first hyaluronic acid filler, and that was called Restylane.

Back in 2004, I was part of the clinical trial to get Juverderm FDA-approved. Since then I have been involved in over 25 clinical trials for everything from KYBELLA to devices—many ,many things. It has been very interesting to learn, before things get FDA-approved, how to use them. We then added devices that do tightening, and we got our Fraxel in 2007. Fraxel was a game-changer because it was non-ablative and fractional, and we could tune it to the specific needs of each patient. That device has been the gold standard for non-ablative resurfacing, ever since the early 2000s. Now what we concentrate on is advanced uses of fillers. We do fillers in off-label manner, to help improve the appearance of the face in a very natural way. My signature is that of a natural result so that you look like the best version of you.

Our mission at the Lupo Center is to provide patients with innovative, effective and ethical care to make each person look and feel their personal best. To fulfill our goal, we provide state-of-the-art medical, surgical and cosmetic treatments to all patients.

Board certified dermatologist and clinical professor of dermatology Mary P. Lupo, MD has been a leader in the field of non-surgical rejuvenation since 1983. She travels internationally to teach her innovative techniques, and her reputation brings in patients from around the country. She started the first formal residency training program for injectables and peels in 1983 at Tulane Medical School and served as past president of Women’s Dermatologic Society, clinical professor of dermatology at Tulane and a founder of Cosmetic Boot Camp. Dr. Lupo holds membership in many prestigious dermatology associations, participates in clinical trials for approval of new drugs and devices and acts as an advisor for numerous aesthetic-minded companies.

The best dermatologist in all of the Louisiana easily. She’s is very knowledgeable and can help you with your skin conditions. Make sure you tell her everything and don’t be shy because she moves fast, and you may forget to tell her something. But all in all I highly suggest her.
More Success Stories